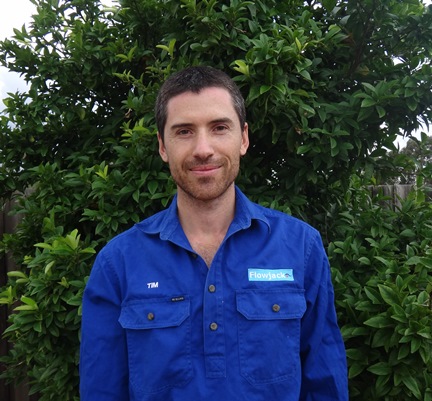 Flowjack was registered in 2008 by Timothy Stewart.

Tim grew up helping out on his father’s cattle farm near the Grampians in Victoria. He enjoyed helping out on the farm but most of all he had a keen interest in machinery and how it all works.

Another of Tim’s interest is aviation which led him to earn his commercial pilots licence. Tim paid his way through working on the land, performing jobs such as fencing, roustabouting, crutching and shearing sheep.

In March 2007 Tim got a job as a pilot on Barkly Downs station near Mt Isa. While he was working and visiting cattle stations he noticed some of the stock watering equipment used was lacking quality of design and could be potentially improved, so he decided to go and start his own business.

He purchased a property on the outskirts of Charters Towers and built a shed. Eventually he did his first sales trip of about 4500 km with a bunch of stainless steel floats strapped down in the back of the Ute.  It was a lot of travelling for just one niche product in the product range but it was a start.

After each sales trip the product range slowly grew as Tim received advice and feedback from customers and potential customers.

How the flexible float arm came about

Tim came up with the idea of the flexible float arm after noticing a lot of bent and broken float arms on the large 3 inch and 4 inch float valves that you often find on large cattle stations. He realised if you make the float arm stronger something else might break if it coups enough force, so he thought why not make it flexible, if it’s done right that should solve the problem.

Tim became convinced there was also a market for the flexible float arms to suit the smaller valves after speaking to customers and especially when his father was having trouble with stock damaging the float arm on his only trough with an operating float valve.