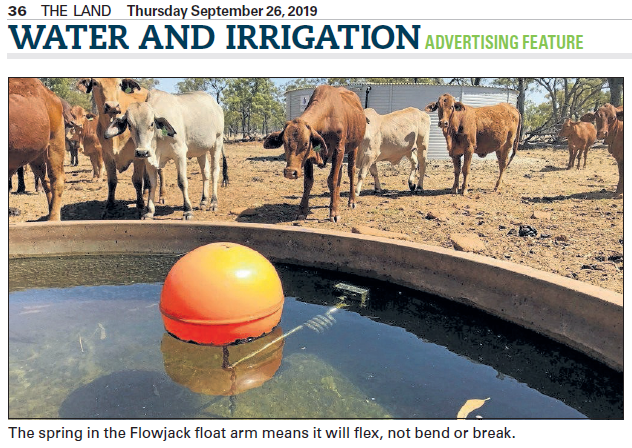 Flexible float arms do not bend or break

FLOWJACK flexible float arms are designed to flex rather than permanently bend or break if knocked by any animal large enough.

All castings are 316 marine grade stainless steel including the valve seat, ensuring the valve will last a long time.

The stainless steel valve seat provides resistance to corrosion and wear at the most critical part of the valve.

He first trialled the Flowjack valves after losing valuable water storage when the conventional trough float arms he had installed were being broken off by thirsty cattle.

Mr Broad said the cattle knocked the float cover off a couple of times and exposed the float arms to sideways pressure and they just snapped and let out a full tank of water each time.

He decided to remove the float cover completely on some of his troughs and see if the flexible float arm could stand up to the abuse of thirsty cattle unprotected.

“I started the trial in February 2018 and we haven’t had any problems so far after about 20 months of use,” Mr Broad said.

“We have recently placed a third order for four more valves with flexible
float arms. In the near future,we plan to order troughs without float valve covers and fit Flowjack float valves with float balls suspended by chain from the flexible float arms.”

”The spring in the float arm eliminates the damage done when stock have access to it,” Mr Hicks said.

“It is a great improvement. ‘We have recently used the SS oval shaped float on a trough that leaked no matter what but this has stopped. Our bore water is very corrosive and slithers of shale are always allowing the valve to leak. But since using the spring arm, this has stopped.