Float valves available in 1’’, 1.5’’, 2’’, 3’’ and 4’’ sizes,
in different float arm and float configurations to suit different troughs and preferences.

Durability
If you don’t have a good cover on your float valve the float arm is the weak link that is likely to be damaged by livestock. The Flowjack flexible float arm resists damage by allowing the float arm to flex rather than permanently bend or break if it is nocked by live stock.

All castings are 316 marine grade stainless steel including the valve seat, ensuring your valve will last a long time. The stainless steel valve seat provides resistance to corrosion and wear at the most critical part of the valve and will not work its way loose under pressure. 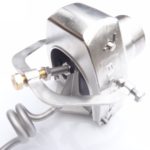 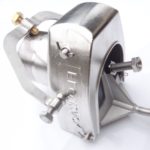 The picture below shows a 3 inch float valve with an elbow float arm and poly shell float.
The elbow float arm allows the trough to be filled to capacity without having the adjustment bolt on the valve head wound right out.

Stainless Steel Floats
The photo below shows a stainless steel float designed for use in suit Northern Stockwater concrete troughs.  All joins are tig welded and not soldered.

For traditional trough configurations where the valve head is above the waterline the following options are available.

Float Arms
You can choose either a flexible float arm that allows the float arm to flex rather than permanently bend or break as shown below or a rigid float arm as shown right. 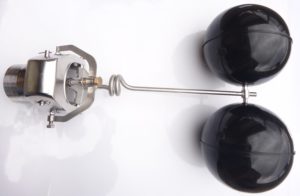